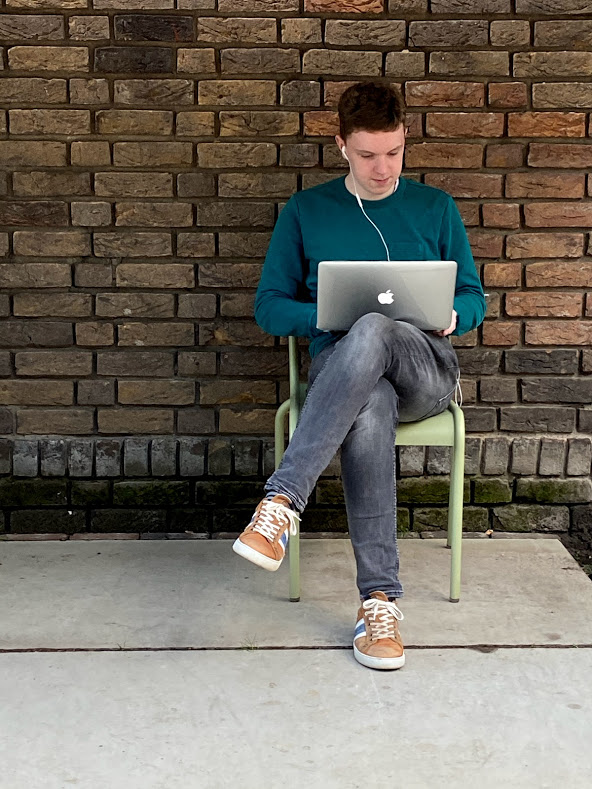 Starships of the 32nd century

In this post I'm hoping to list as many ships from the 32nd century as I can.

Book's ship showed up in the very first few moments of Discovery's third new season. Michael crashed into it at full speed in the Red Angel suit.

The ship is a scout scrip and is capable of cloaking. It can do transwarp, and if provided with benamite, it is also capable of quantum slipstream — though it is a dangerous option thanks to the Burn.

Book's ship is also capable of dissecting itself, allowing it to make quick turns. 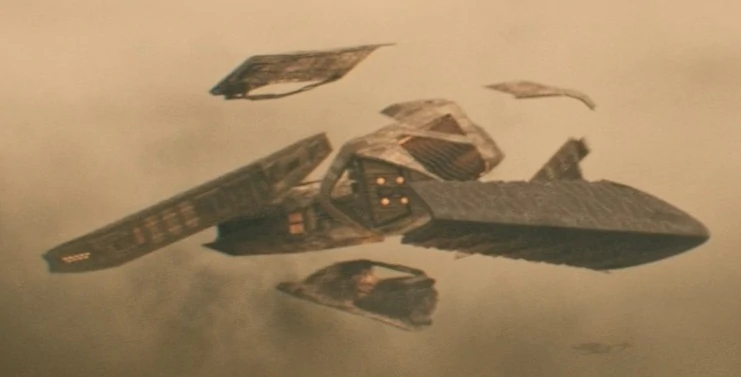 The ship also has a programmable matter console, used for navigation, and more.

The interior of the ship is hardly known: we've seen its bridge, which is also where the bed is located. It's unknown if you can actually walk into the other half of the ship, but it's also possible that section is only for propulsion and maneuvring.

There is a small hallway next to the bridge, so there's that.

It is also possible the other half of the ship is a storage space of sorts, like Picard's vault in PIC. It wouldn't require walk-in, but could instead be transported.

This is the shuttle Michael was shown to be flying in her year alone in the future, looking for Discovery. It's unclear how she acquired this shuttle.

It is interesting that such a small vessel is liveable, even if it is even smaller than Book's ship. It's unknown how often she stayed on Book's ship, or even where she put the shuttle when she did — I don't think Book's ship has a shuttle bay.

There is also the Earth defense force, now guarding earth from any potential attackers after the Burn.

Earth's ships are interesting in that they don't apear to have hulls at at all, and instead are arch-shaped. They also don't have two separate hulls connected through a simple beam like many older ships like the Galaxy-class, Constitution class, Sovereign-class, and more.

They do have a forward and backward direction, which I wouldn't have expected. With the ship rotated this way, half your crew can't see what's going on unless they have futuristic screens nearby, which I imagine everyone does.

There are also 4 floating shapes on the ship's sides, and I am not sure what those are. The red light might indicate weapons or propulsion, but it's unclear. The lower two are torpedo launchers, but the purpose of the top two is unknown to me.

There's also Wen's raiding ship and drones. I can't seem to link these to any other known ships, so they fit in this category.

Wen's ship appears to have a large lower section with another section sticking out on top. 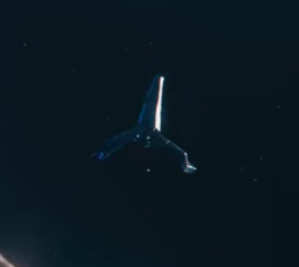 It's unclear to me if these drones are actually drones, or Wen's ship from different perspectives — they are constantly in motion. It's likely they are all the same ship, though — I imagine Titan isn't in a high supply of starships.

The federation still has ships — quite a few of them, many with designs we never could've imagined before. Not a lot is known about all of these ships, so I will list the ones we know anything about.

Star Trek CBS on Twitter (@startrekcbs) has released some very helpful guides to the ships on Twitter. 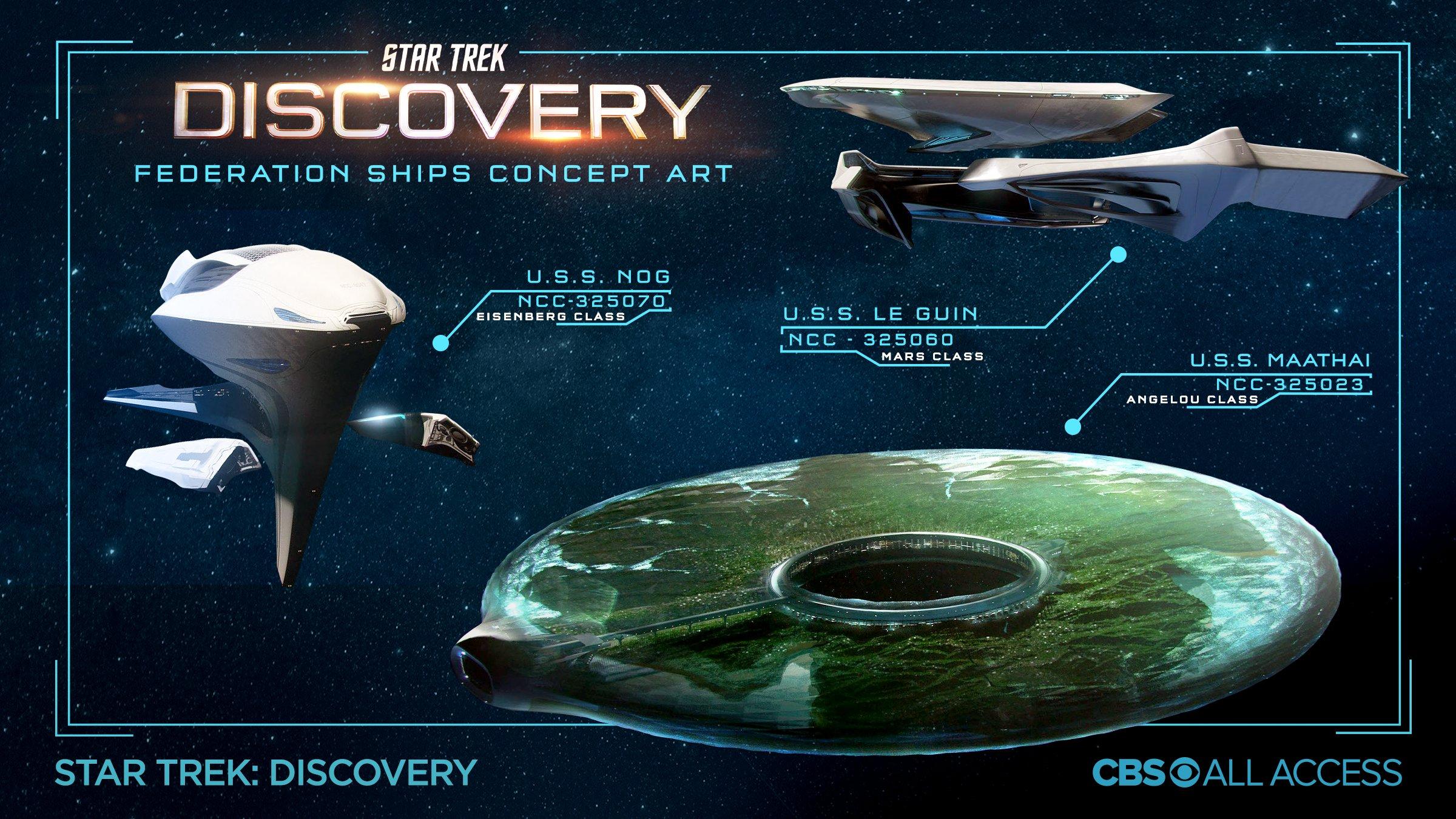 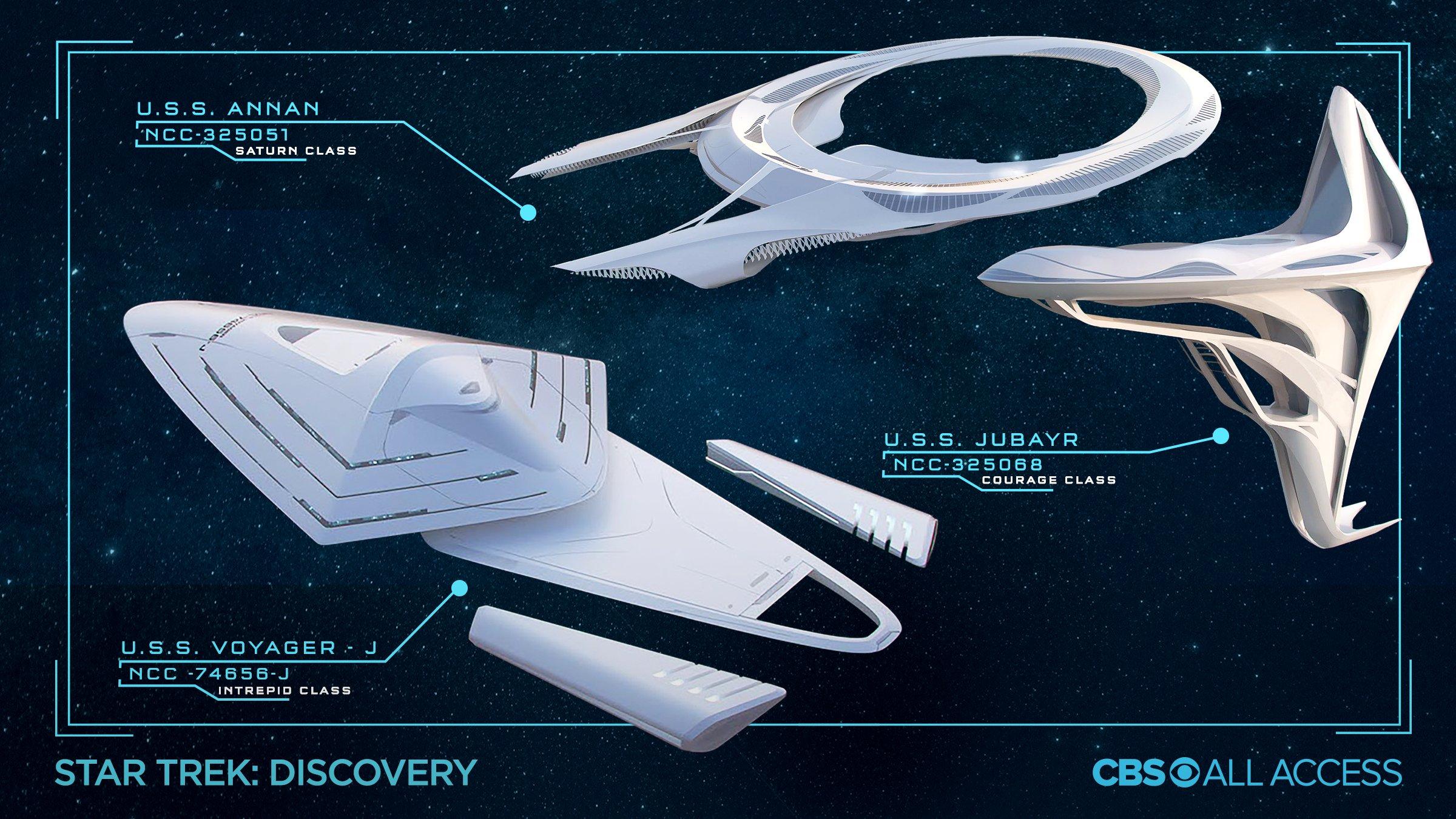 The Saturn class features a massive hole in its center, and seemingly not that much mass. There is never a reason mentioned for this hole, but it's possible it's so that enemy ships might have a harder time hitting it. It's also possible it's so that they can use programmable matter to add anything they need without adding weird lumps to the outside of the ship. These things could be extra rooms such as storage, crew quarters, and more.

This is one I think many fans will recognize: the U.S.S Voyager. The 11th version of one of the best-known ships of all time.

This ship is interesting in that it appears to be entirely modular: it has detached hulls and detached nacelles. I wrote a post about the ship's possible modularity here. 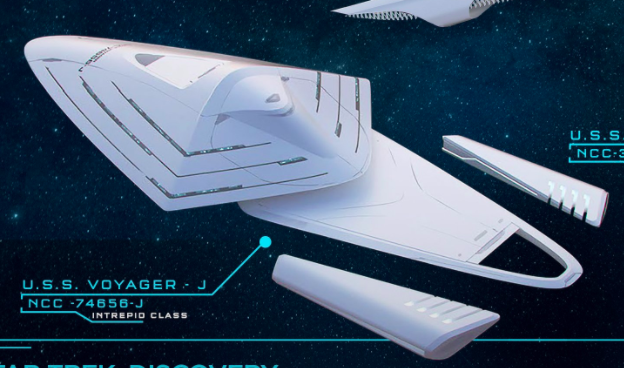 The interestingness here lies in the ship's lack of nacelles: it doesn't appear to have any kind of engine, and yet it moves! I'm greatly looking forward to learning more about the future. 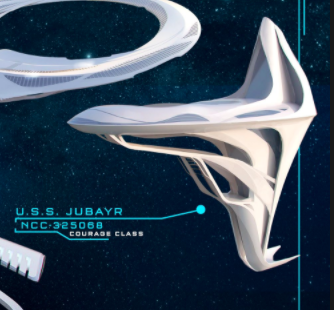 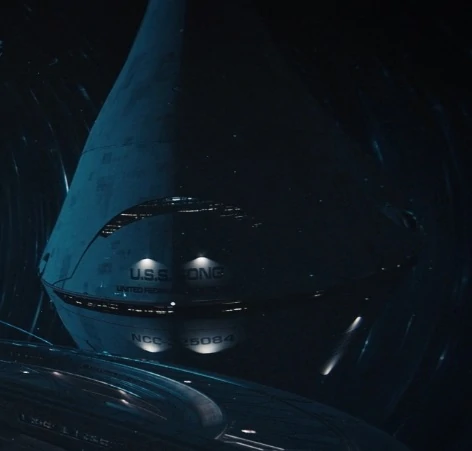 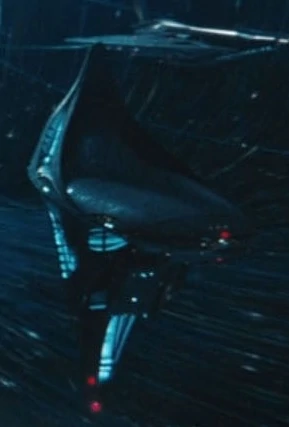 An honoring of the late and great Aron Eisenberg, who played Nog in Deep Space 9. He passed before this episode, and this is a really great tribute for a fantastic ship design. 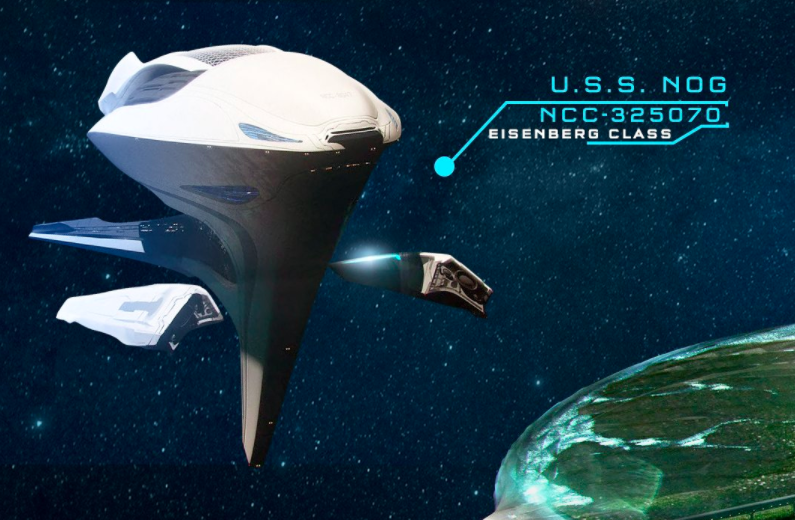 The Mars-class. It's eluding all of us Trekkies, making us all wonder: how does it look? Every angle you take and it looks like a different ship.

One thing is for sure: it has detached nacelles, just like the Voyager-J. It doesn't appear to have the same shape as the Voyager's nacelles, which is also interesting — you'd expect them to make a "one size fits all" nacelle design, but no such thing is done.

It's possible this nacelle design allows the ship to "retract" it to form a whole with its primary (and only) hull, though no such thing has been shown 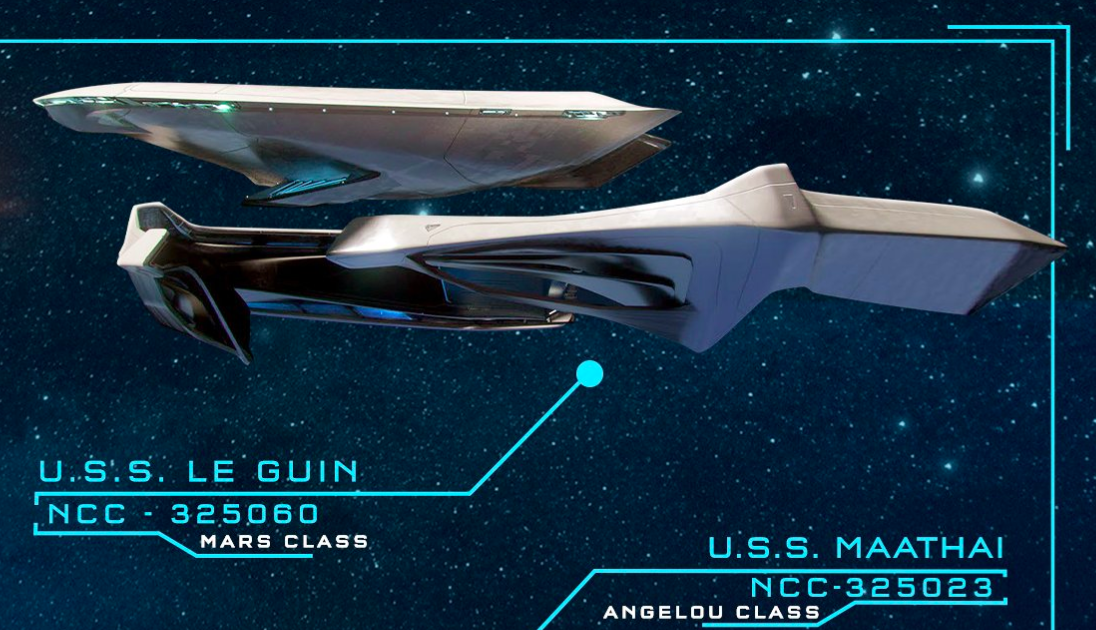 A forest-ship. It's likely that this ship is actually a bio-ship rather than a forest ship, but so far it has only been shown to contain forest.

Personally, I'm not really sure about the point of this ship. It's only shown as stationary and does not have any nacelles — though it might have the new futuristic propulsion.

Perhaps the plant-life on these ships is endangered on their native planets, or these plants offer valuable research. Perhaps it's none of those things, and the plants just smell nice: maybe they transport the smell into Federation HQ, who knows at this point.

Other ships at Federation HQ 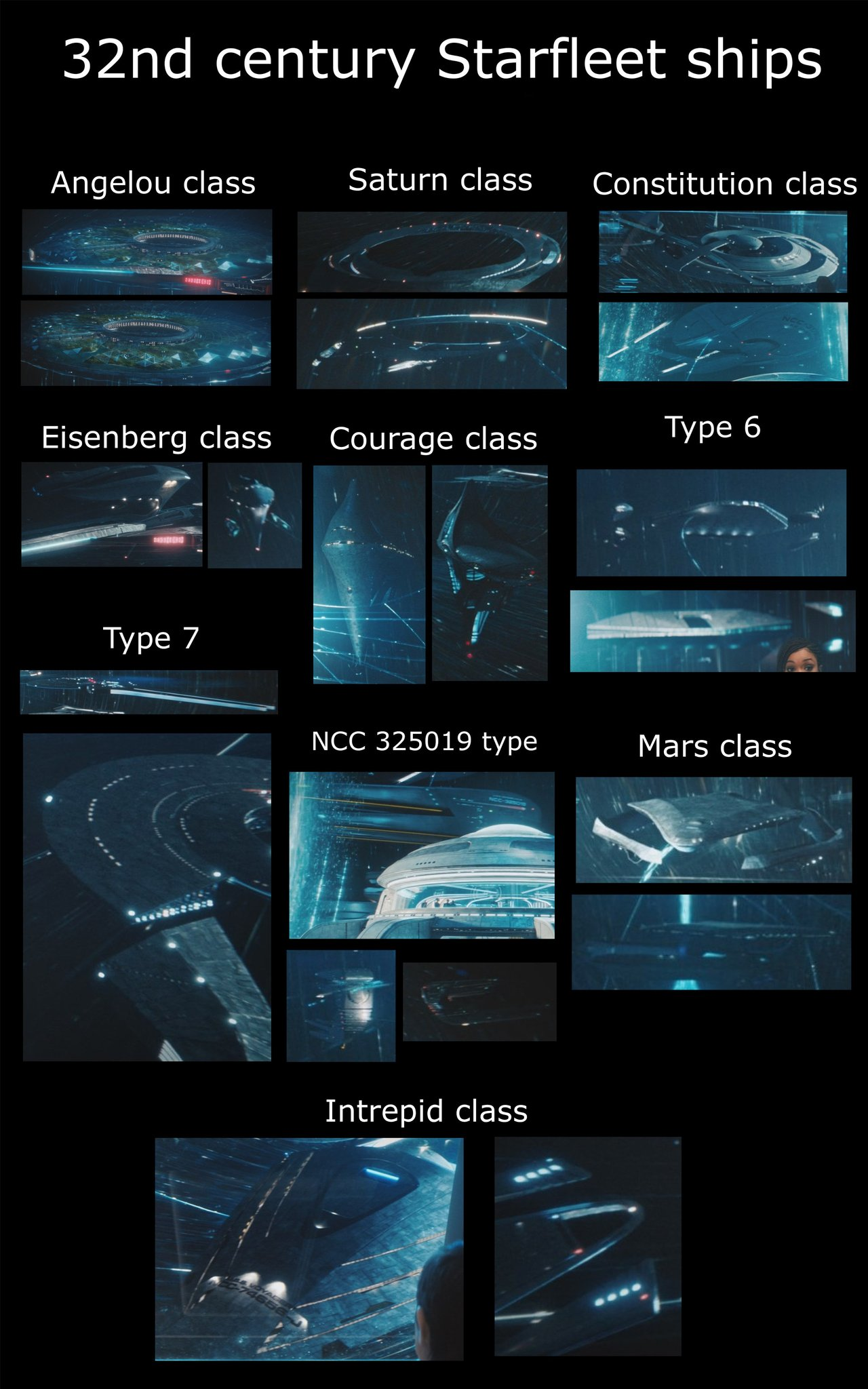 The Tikhov is the Federation's seed-ship, storing seeds from all over the galaxy. Its design is unique thus far, with no other ship looking like it. 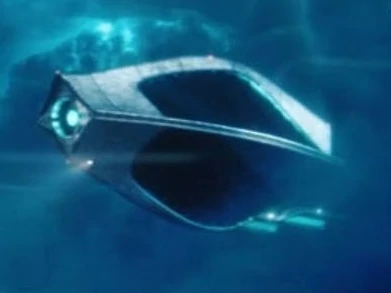 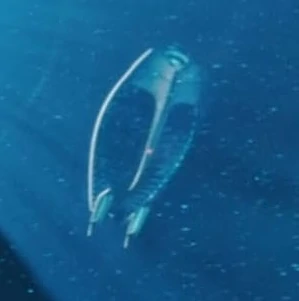 The ship's scale is unclear to me. The insides are quite large, but the outside does not look anywhere near that large: perhaps they've developed TARDIS-technology in the future, like the Enterprise-J (from a few hundred years earlier) would imply.

There is just no universe in which these two things fit: 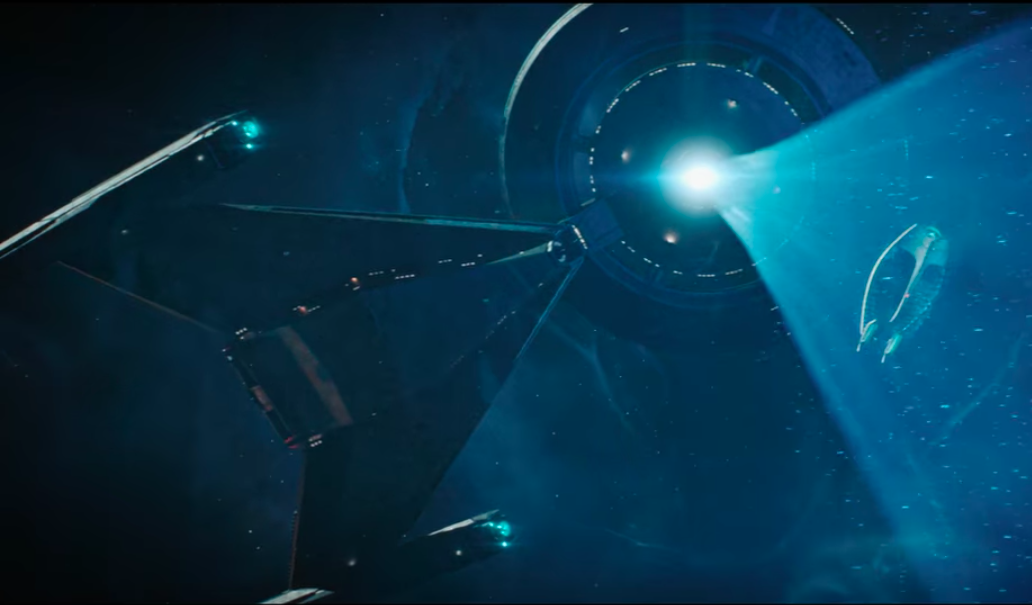 The Viridian is Osyraa's heavy cruiser, used to suppress those in the Chain.

It was able to be beaten in combat by Book's ship, a much smaller ship. It was later also able to jump with the Discovery using tentacles of some sort. 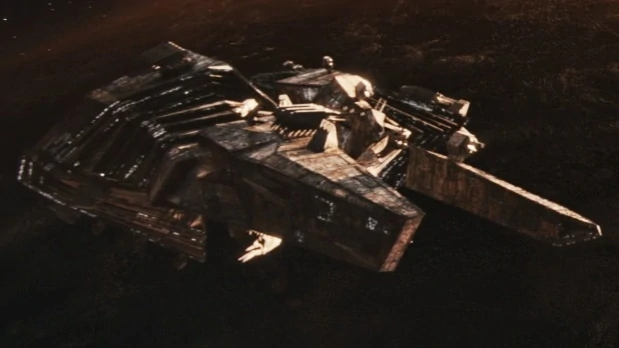